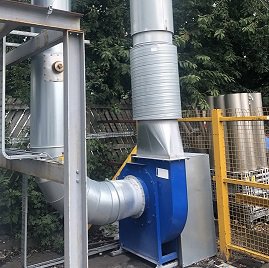 Low frequency (c 149Hz) tonal noise from a large variable-speed ID fan venting via an 83m high stack had caused complaints over a wide area. The company had spent considerable time trying (and failing) to find a practical conventional mitigation solution. We designed a bespoke stack silencing system that completely eliminated the problem noise without affecting fan efficiency. However, complaints then recurred post silencing that, as it turned out, were being wrongly attributed to our clients' site. This was pontentially awkward as the Environment Agency was involved.

As the Environment Agency (EA) was involved, the site manager wanted to resolve the situation as rapidly as possible. He linked with us via Whatsapp on his phone, using the app to forward a couple of video clips. These allowed us to identify instantly that the complaints were now being caused by a tone at 346Hz and that the source was a small fan on a neighbouring site. After contact, they emailed the fan details and we designed an aerodynamic insert silencer that was manufactured locally and fitted within hours to eliminate the tone. This very rapid process (a few days) avoided the potential further involvement of the EA and ensured that removing the nuisance to the local residents was fast and effective.

This plot shows the overlayed noise signatures of both the stack and small fan noise before and after silencing based on smartphone data. You can listen to the audio at the top of the page showing the effects of the modification - view the video on which the analysis was based here >