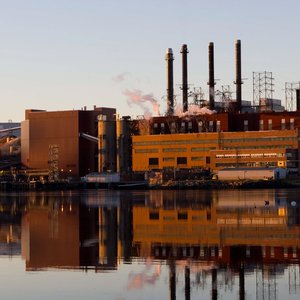 An article about the application of our Quiet Fan technology (QFt) to reduce the noise from large fans feeding stacks in the power industry has been published in Power Engineering International. The journalist suggests that the widespread adoption of the technology in this industry could reduce both capital and running costs very substantially compared with conventional fan silencing techniques – i.e. traditional attenuators, acoustic lagging and enclosures.

He uses the example of the 50MW Schiller biomass power station in the USA (the largest station of its kind) where the massive 2 storey ID fan feeding the stack (shown below) was modified in only 12 hours (that’s not a misprint – just 12 hours from noisy to quiet) to reduce the fan noise by 10dB at fraction of the cost and with a much lower power consumption compared with the conventional fan noise attenuator previously fitted.

“…the 3m wide ID combustion fan created a far-field noise that could be heard across the river…after installation (a process that took only 12 hours), we recorded a 10dB drop in noise, which is huge…recorded a reduction in the power used by the ID fan, after the QFt had been installed.”  – Jim Granger, Senior Engineer, Schiller 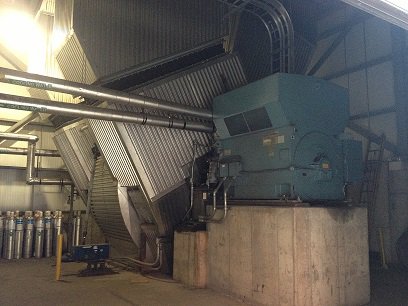 The journalist makes an interesting point in that it all seems perhaps too simple… It may be difficult for the industry to gets its head round the idea that instead of the massive engineering structures and extensive (costly) down-time historically assumed to be required, it is often possible to slip elegant aerodynamic aids inside the fan casing within a few hours that eliminate the noise problem at source – and  without compromising fan efficiency (as is often the case with conventional silencers). The same argument applies to other industries such as cement and steel works fans and associated stacks. Whilst QFT has become established as best practice for this type of fan noise problem across many applications, some industries are “acoustically lagging” behind….

View more examples of the fan noise attenuation technology on fans from 0.5 – 5m in diameter