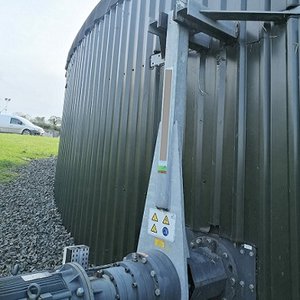 The noise from a set of anaerobic digesters (AD) had caused complaints from nearby residents that resulted in a Noise Abatement Notice. The company employed noise consultants and installed partial enclosures and barriers round the mixer motors and gearboxes on the AD tanks. The subsequent noise report concluded that there was no longer a significant noise impact from the operation of the plant as the attenuation measures had significantly reduced the noise breakout from the mixer motors.

This conclusion was simply wrong and the complaints continued.

The BS4142 report generated by the consultant was based entirely on overall dB(A) and third-octave band noise level measurements. Despite the fact that the complaints were about tonal noise, no detailed frequency analyses were carried out. This is a common failing in environmental noise reports, as is the lack of knowledge about effective best practice engineering noise control options.

We requested smartphone video clips when the company contacted us. From these, we were immediately able to diagnose that the only problem was a 953Hz tone at the gearbox gear mesh frequency as shown in this plot. We were also able to provide detailed engineering noise control recommendations, including the high-efficiency damping of specific components to reduce the gear mesh vibration re-radiated as noise. The complaints have ceased...