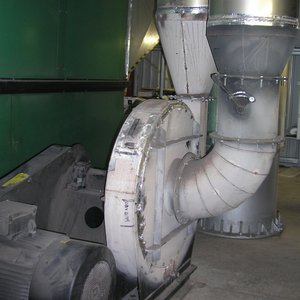 Despite considerable time and money being spent with the supplier and acoustic consultant installing silencers and reducing fan speed, a noise abatement notice was due because of numerous complaints about combustion fan noise. We resolved the problem overnight via Barry welding in 22dB of attenuation during a normal shutdown.

Combustion fan noise from a new waste heating system at a Palgrave Brown MDF site had caused numerous complaints from neighbours with a noise abatement notice in the offing. The supplier and their consultants had tried conventional measures (additional silencing, reduced fan speed) over an extended period to no avail. On the point of admitting defeat, they were referred to us. Our solution (controlling the noise at source using Quiet Fan technology aerodynamic fan noise control) was fitted in hours. The next morning, it was hard to tell that the fan was running as the tonal ID fan noise was reduced by 22dB and the overall level by 9dB(A), quickly, permanently and without affecting fan efficiency.

The results were so impressive that the director, Alan Fillingham, recommended that our approach should be used throughout the group.