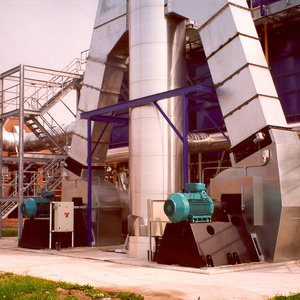 Severe noise problems were encountered from the fans in a new regenerative thermal oxidiser plant on an industrial site. The suppliers suggested an earth berm noise barrier, large fan silencers and acoustic enclosures that would not only have cost a 6 figure sum, but would have been a complete waste of money as they would not have worked.

We used accurate and precise diagnosis to isolate the key subjective sound features in addition to the broadband noise. We removed the tones using our aerodynamic fan noise control technology; slowed one fan to remove the “beat” with the other unit; moved and changed the damper to improve flow and added small conventional attenuators to reduce broadband noise. These modifications eliminated all the noise character and reduced the overall noise by 15dB(A) at a few % of the costs associated with the traditional (and largely ineffective) noise control package.