Data center noise (or "data centre noise" in the UK) is an ever-increasing problem across the planet as more are built to service our digital world. Crypto mining noise also falls into the same category of problem. The primary noise problems from both data centers and crypto mining operations are the cooling systems, hosts of chiller fans that generate both broadband noise and low-frequency tones (hums and drones). In both cases, conventional noise control methods typically reduce efficiency and increase power consumption. 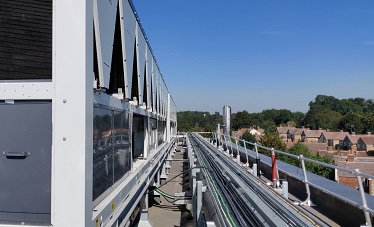 In addition to the cooling systems, there will also be power generation on-site that can be continuously online (e.g. CHP, gas turbines) or on standby (e.g. diesel generator sets that are run to a test schedule), both of which can cause noise problems.

There are innovative noise reduction technologies that solve both problems. These don't just cut noise without reducing efficiency, they can actually increase fan cooling efficiency by up to c 20%, potentially making projects self-financing.

The following is a detailed guide to data center noise attenuation best practice based on the latest technology.

Data center cooling fan noise sample: the same low-frequency hum or drone recorded outside and then inside a building.

The difference illustrates the effect of the sound passing through glazing or building structure that attenuates higher frequencies, enhancing the low-frequency content of the interior sound. This low-frequency tonal noise content is a very common cause of complaints that is usually not addressed as it does not contribute to the headline overall dB(A) value (the "A" weighting progressively attenuates low frequencies). 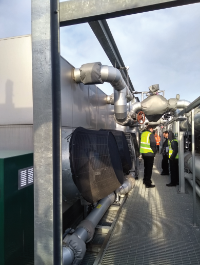 More information
I'd like to discuss data center noise

This plot is an overlay of the noise signatures from the recording above, measured both outside and inside a building. The latter (red trace) is overlaid with the corresponding "A" weighted signature showing how the dominant 73Hz tone is attenuated by 25dB by the "A" filter as illustrated by the green trace.

Not understanding this fact and the role it plays in the cause of complaints is a very common mistake and the reason for many failed data center noise mitigation strategies where the main sources (fans and generators) produce low-frequency tones.

All the traditional noise reduction methods are based on adding noise control equipment to the plant. Our innovative approach is primarily based on modifying aerodynamics to render the cooling systems more efficient (in one case, 20% more efficient). As a result, fans can be run at lower speeds to cut broadband noise and save energy. The aero-mods also eliminate problem low-frequency tones. This approach is dramatically lower cost and more efficient than the traditional methods.

If necessary, residual noise can be reduced using a combination of other new technologies or much more modest conventional measures.

There are 2 separate noise issues that need to be addressed:

These provide greater attenuation and enhanced cooling efficiency than is possible using conventional methods and at dramatically lower costs. 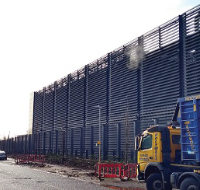 Acoustic louvres typically provide modest attenuation (virtually none at low frequencies) with significant backpressure that can affect free cooling and hence overall system efficiency. Often fitted along roof edges where structural strength and wind loading factors have to be taken into account. Where the noise is dominated by broadband dB(A) and relatively little attenuation is required, they can be an effective option but should be costed against alternatives.

Conventional acoustic barriers must be located as close to the source as possible to provide good attenuation. However, as this geometry blocks airflow, they are usually located as far as practical from air intakes to maintain cooling efficiency at the expense of compromised attenuation. Note wind loading and structural considerations.

Neither of these options can attenuate low-frequency sound.

What are the causes of data center hum?

One of the most common complaints about data center noise is a low-frequency humming sound that travels long distances.

There is an elegant, low-cost engineering solution to the fan noise problem (see below) that can increase cooling efficiency (self-financing). Add improved silencers for the engines where necessary or retrofit elements to turbine silencers to improve low frequency attenuation.

Air-cooling system fans very often generate high levels of low-frequency tonal noise (hum or drone) that is omnidirectional and travels large distances. Sadly, it is virtually impossible to get information re tonal noise from suppliers. We resort to analysing smartphone video clips from anywhere in the world to evaluate tonality.

This is based on a similar approach as that used to cut broadband noise (see above). We use Computational Fluid Dynamics (CFD) modeling to aid in the design of retrofit aerodynamic components that reduce the low-frequency tonal noise elements - typically by 90% (10dB) to 99% (20dB). As this cuts the sound at source, both intake and exhaust noise is simultaneously reduced. In most cases, the fan performance is significantly improved, increasing efficiency and cutting running costs which can make these projects self-financing.

This is best practice as it is the only practical and effective method that can be used to reduce low-frequency tonal noise from cooling systems without very seriously compromising efficiency. It is also a dramatically lower cost option. 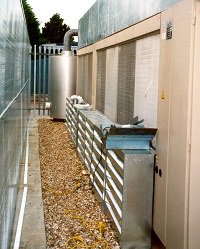 Tonal fan noise is radiated equally from the intakes and the exhausts. Consequently, both must be treated to provide any significant attenuation. In practical terms, this means very high backpressure or very long outlet silencers (the minimum one wavelength silencer for an 80Hz tone is 4m) coupled with intake silencing (usually as part of an acoustic enclosure) that suffer similar problems.

As a result, there is no practical way to use conventional silencers and enclosures to attenuate low-frequency tones. Perhaps this is why there is such focus on reducing the overall dB(A) (which can be attenuated using these techniques) rather than the often much more problematic low-frequency noise features. 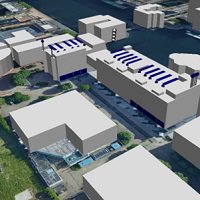 We have extensive experience in creating noise models for data centers to generate noise contour maps both for planning applications for new projects and to aid in meeting environmental noise criteria on existing sites. The factor that determines the accuracy and usefulness of noise models is the acoustic knowledge and expertise of the consultant. The key elements we consider are: 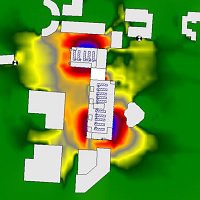 In addition to desktop noise modeling exercises (which can include checking or updating existing noise models), we can also provide full environmental noise measurement and assessment services supported by the provision of detailed mitigation recommendations based on current innovative best practices.

I'd like to discuss a data center noise project 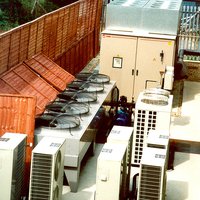 Data centres (or "data centers" in the US) require a lot of cooling - which involves noisy chiller fans, air handling units, cooling towers and condensers. Moreover, in addition to the general fan air noise, there are often low-frequency tonal elements (hums or drones) that cannot be silenced using conventional attenuators and acoustic enclosures and barriers. Unfortunately, poor diagnosis of the exact causes of noise complaints has often led to ineffective noise control measures that not only fail to solve the problem, but also compromise cooling efficiency.

Fortunately, there are effective low-cost alternatives that can actually increase cooling capacity...

A Noise Abatement Notice had been issued re the noise from a large array of chillers and air handling units at this data centre. The company had already spent nearly £100k on noise control with very little success and were considering claiming Best Practicable means (BPM) in court when the council suggested they might like to get a second opinion from us to avoid the legal route…

We carried out a very accurate diagnosis of the precise noise elements that were the cause of the complaints. Based on this evaluation, we designed a set of precise retrofit noise reduction measures that were guaranteed to be BPM. The innovative noise control measures included:

These noise mitigation measures cut the overall noise at the complainants from 48.5dB(A) down to 36.5dB(A) (as illustrated by the audio recording above and by this noise signature) without affecting the performance of the cooling systems. In addition to the reduced broadband noise, the tonal "character" of the noise was also eliminated.

The whole process took approximately 6 weeks from start to finish and completely resolved the complaint issue.

The overall effect was to reduce the data centre cooling system noise by 15dB at less than half the previously expected cost. If this approach had been implemented in the first place, the company would have saved over £100k, the council would have saved resources and the complainants would not have had to suffer unnecessary disturbance over a 2 year period.

More details on how to reduce environmental noise from data centers

Data center noise from axial cooling fans was the source of complaints from the local community. The cause of the noise complaints was a series of low-frequency blade pass tones at around 80Hz and harmonics that traveled a substantial distance from the site.

Conventional silencing was not a practical option as the silencers would either have to be very long (at least 2 wavelengths at 80Hz which is around 8m in length - and installed at a height...) or, a shorter but still very large silencer, with very high backpressure that would have compromised cooling and increased running costs.

Our alternative approach was to work with their engineers and use Computational Fluid Dynamics (CFD) modeling to develop a set of aerodynamic modifications that would not only reduce the tonal noise but, at the same time, improve fan efficiency. The results were spectacular...

97.5% fan noise reduction and up to 22.7% reduced power consumption

This project demonstrates just how effective this aerodynamic approach to data center fan noise reduction can be. Conventionally, fan silencing almost always means significantly reduced system efficiency. In cases like this, the aerodynamic modifications would be worth implementing for the efficiency gains alone, even if there was no noise problem.

Self-financing noise control is no longer an oxymoron...

More details of the best approach to reducing the noise from data centres, chillers and air conditioning plant > 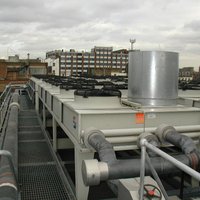 The cost of reducing the data centre noise from the air conditioning system chillers on the roof of a large multi-storey facility to meet the requirements of the Local Authority had been quoted as costing over £300,000 using conventional acoustic barriers and silencers. Fitting these acoustic screens round the chillers would have required:

These proposed noise control measures would also have reduced the cooling capacity of the HVAC system, increasing running costs. The data centre communications company involved approached us in the hope that we might have a better idea.

A very careful analysis of the noise sources and layout of the air conditioning plant plus some lateral thinking resulted in an elegant solution involving a combination of:

The result was a set of modifications that were easy to implement in convenient stages and reduced the data centre noise by 15dB(A) at a cost of c £40,000 – and with no effect on the normal operation or the overall efficiency of the system - unlike the previously proposed conventional noise barriers and silencers.

How to attenuate the noise from data centers